A Mall Crawler is a very specific thing. It is a vehicle that is designed with looks over function. The accessories will shine and glimmer, but they won’t hop over a curb. They are for people that want the look but don’t want to earn it.

Maybe a weekend warrior’s wife wants the look but she is more of a spectator than a driver and wants to feel close to the lifestyle without getting her hands dirty. The soccer mom will drive one. So will the teenage daughter that wants to impress her friends.

It is easy to figure out who will drive a Mall Crawler and it isn’t the person that writes these words. I have seen them on the streets of Los Angeles. The mall crawling culture is alive and well in California. 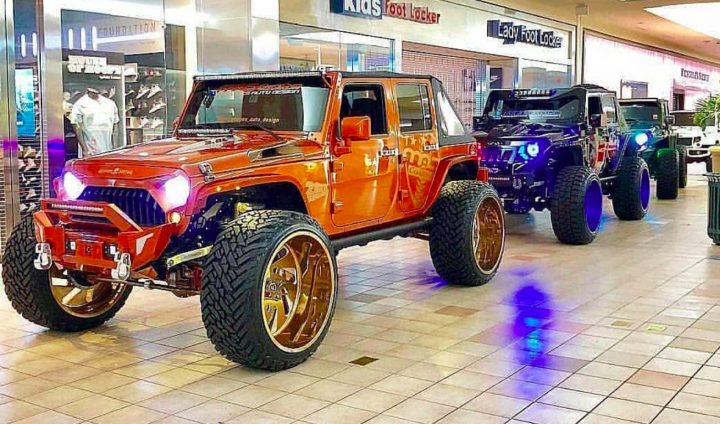 For those that are not familiar with what a Mall Crawler is, it isn’t an off-road vehicle even though it may look like one. They aren’t designed to tackle any kind of terrain outside of asphalt or concrete. You might find one on a gravel road, but it probably won’t get you very far.

Mall Crawlers are nothing more than a gear head’s version of a hot rod coupe. Perhaps the interior is going to be nicer and the vehicle will stand out from your standard showroom stock item. They may even have four-wheel drive, but it isn’t necessary.

What they are is a rolling billboard for the aftermarket industry. The exterior will have so many accessories that for some, it may be hard to tell what vehicle is underneath all of those parts.

They are popular with men and women alike, but I always see them driven by males. It isn’t age-specific either because I have seen teenagers and octogenarians driving these types of cars.

The big difference between a Mall Crawler and an illegal street racer is that there isn’t quite as much testosterone involved when you see one of them on the road. The owner may be super confident, but usually not overly macho like someone in a souped-up hot rod.

Mall Crawlers don’t have the looks to scare others on the road. They are always very flashy, but they aren’t intimidating whatsoever. The culture isn’t as much about speed as it is head-turning.

What Does Mall Rated Mean?

They won’t leave the pavement because they have all the bells and whistles to look pretty. A woman all done up with make-up won’t want to play a pickup game of football.

What Does Mall Crawler Mean?

Your mom has a mall crawler. Soccer moms drive mall crawlers. Jeeps that look like they are ready for anything are going to the store or the mall and nothing more. They are a money pit. Like an off-road beast or a rock crawler, they love all the accessories you can bolt on them.

But they are only for looks. The function takes a back seat and rightfully so. Stick on chrome or huge wheels with street tires don’t function so well. Racing stripes don’t look so cool when you’re spinning tires getting your pretty paint job all dirty.

You don’t know what the mall crawler is? It’s a grocery getter that looks like it can get through some rough terrain. So why does your mom drive one?

It’s just convenient. You can haul stuff in them and more importantly, you can almost never tell if she had to leave early for an appointment if you walk into the grocery store to meet her.

Sure, there are other cars for that too, but it’s like buying a Hummer and thinking you’re never going to go off-road because it looks like something made by the military. Some mall crawlers cross over into full-blown SUVs or cars with huge clearance or huge tires.

But what about a mall crawler that you can take off-road? What if it looks like a Hummer and makes you feel invincible even though it’s just a grocery getter? I have just the car for you. Meet the Nissan Atlas Concept. 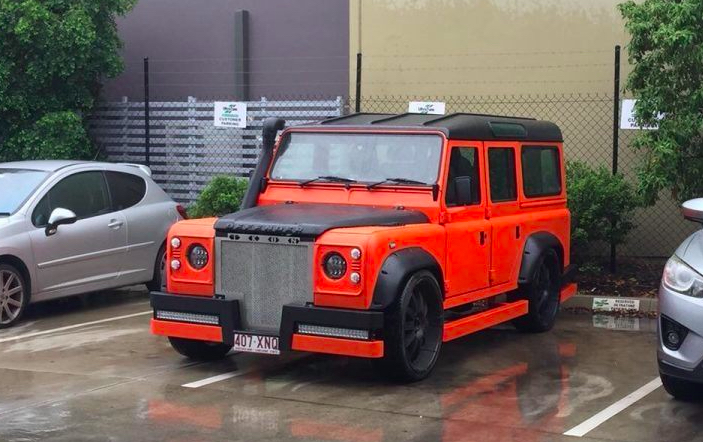 You can call them a Street Princess” or maybe Brodozers”. They are off-road badass trucks or SUVs that never leave the dirt and sit there and look pretty. They are the show dog. They are the trophy wife. High maintenance and low function.

A mall crawler is exactly that. A mall or grocery-getter with off-road looks.

This article goes out to all the wannabe truck owners who think they can slap some aggressive-looking rims and an equally overdone lift on their family wagon, pop the hood and go cruising for chicks. No bro….that’s not how it works. Do you know what is even sadder? You can’t even take them off-road. You are just a poser, not an adventurer.

Wake up! These mall crawlers are taking over the off-road community….and it’s not cool! A “brodozer” is usually based on a stock frame with at the very least a mild lift and some big tires.

Basically, an oversized 4×4 golf cart. It is nearly impossible to fit any stock SUV / CUV with a true off-road suspension system that will give good ground clearance without doing irreversible damage to the body parts surrounding it.

Once you start cutting into your floor pan or adding a tube above the sheet metal, you might as well get a body lift. Yes, it’s that bad.

These “brodozers” spend 99% of their time on the blacktop and occasionally make an appearance at your local mall to show off for all your friends and family (don’t you feel like a poser now?). 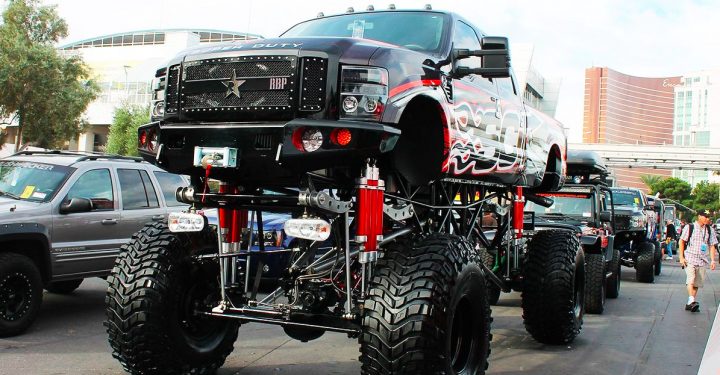 Make Your Own Custom Jeep Badges

Some people are taking it one step further:

“It’s a Jeep. If I wanted a Hummer, I’d call your sister”

Main Takeaways – What Is A Jeep Mall Crawler?

Maybe it’s a guy that doesn’t want to go through the motions of fighting limited ground clearance and constant steering input. He wants the look, but the mall crawler lets him see over traffic without flooring it.

The soccer moms of yesterday are driving mall crawlers today. They have no idea what they are doing but they think they look cool. They are having fun and as long as they don’t hurt themselves or anybody around them that is pretty sweet. Everyone has their weirds quirks or habits and mall crawlers are just a more public display of these quirks.

Mall crawler Jeeps were born from the SUV craze, and it’s an easy step from mall crawler to lifted mall crawler. The look is similar and you get a lot more height in the process. It makes sense that the soccer moms would like this look because they can see over traffic when cars are at a standstill or crawling at slow speeds.

There is nothing wrong with mall crawling, but you can’t say it’s more capable than stock. It isn’t. They are simply Jeeps that look like they could go off-road (sometimes) but most will be used as grocery getters and mall crawlers.

The two primary reasons why people have a problem with this are:

1) It takes away from the offroad capabilities of a Jeep.

2) People have no clue what they are doing in a mall crawler and could hurt themselves or other people. 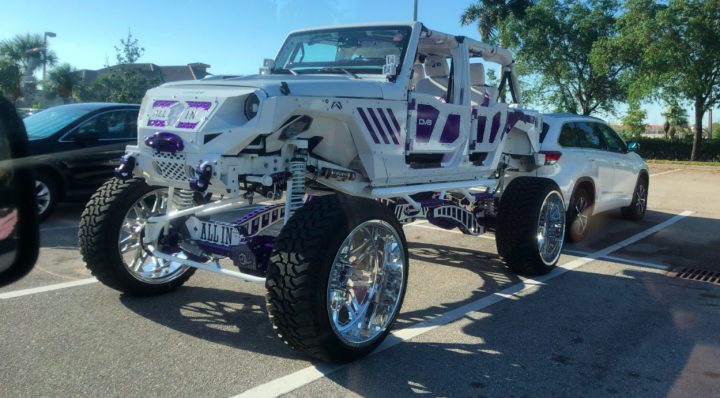 While mall crawlers do take away from offroad capability, we should be able to separate that into two issues:

If we edit this definition based on how most people actually use their Jeeps:

What is wrong with this picture? Absolutely nothing. If someone has fun in their mall crawler and doesn’t hurt anyone else it’s all good.

There are people that try to justify the use of their mall crawlers for offroading because they see others do it. If you aren’t buying a Jeep to go offroading but you are going to do it, then by all means go ahead.

The problem isn’t with people doing what they have fun in their Jeeps, the problem is when these same people try to justify mall crawling as being somewhat capable of being an offroad vehicle. It’s not representative nor does it warrant or deserve the capability of a true offroad vehicle.

This is where the problem lies with mall crawlers today, people are trying to legitimize them by saying they are capable of being an offroad vehicle when they are not. They can’t be used as an offroad vehicles because they lack ground clearance and don’t have lockers.

It’s okay to have high spring rates and big tires, but you need a place to put the power of a V8 and a place for the rear axle to move without extreme angles. The mall crawler cannot do this because its frame is restricted from being lifted beyond 10 inches. As you lift higher, your frame rails become less capable of being lifted which makes it harder to lift.

A mall crawler can’t go offroad, even if it’s modified because the frame rails are restricted from being lifted beyond 10 inches. They also cause problems on the street when you hit bumps at high speeds because they have zero flex and ride very stiffly.

How Much Water In A Gas Tank Will Ruin A Car?

I’m Tall! What Is The SUV With The Most Legroom?