There are a lot of Jeeps. The Wrangler has seen a lot of variations and sizes and nowadays colors. Oh god, the bright and flashy colors that scream “off-road rice rocket” look horrendous. One difference between these cars and Jeeps is MPG. Jeeps are not good on gas. Or are they?

Compared to other equivalent SUVs and off-roading oriented trucks, though, a Jeep’s gas mileage isn’t horrible. And for what a Jeep is engineers to perform it doesn’t have the worst gas mileage. But are Jeep Wranglers good on gas? 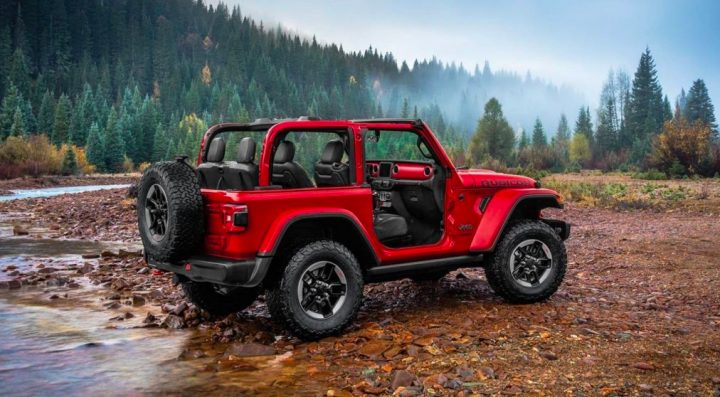 The Jeep Wrangler is a vehicle that does not require a large engine to power it. This makes them not only cost-efficient but also good on gas mileage. It seems as though the Wrangler’s main purpose was for off-roading and rough trails, not necessarily city driving, so this was factored into the test.

With this in mind, the Wrangler did not have to be very good on gas since it was not necessary for around town driving. The reason they are good on gas is because of their small engine size and lightweight.

It is also notable that many people who are getting a Jeep Wrangler are using it only for their off-roading purposes. Although they are good on gas, they are not necessarily great because of this. They are mainly used to get from one place to another, not to haul heavy loads or be extremely fuel-efficient .

If you are looking for a vehicle that is good on gas but also has an engine that can conquer any terrain, then the Jeep Wrangler will suit your needs perfectly.

These Jeeps are the ones that need to be covered in mud the most, and ironically, they are the ones that will most likely NEVER touch the dirt. So we thought about which Jeep Wrangler gas mileage is best? The worst of best Jeep MPG can vary a lot with the year and motor type. 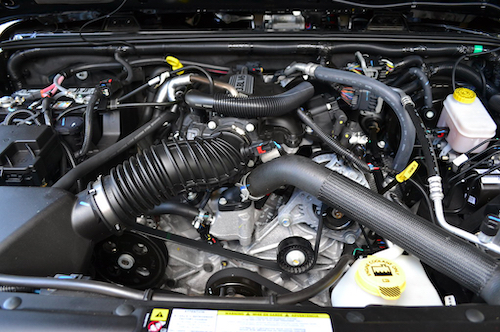 Jeep Wrangler fuel consumption tends to vary with models, age, drivetrain, and engine sizes. But for this write up we are going to look at only engine sizes and model year. The numbers are for 4X4 models with a manual transmission. For 2WD add 1 MPG and for automatic transmission subtract 1 MPG for all models.

In general, you can assume that if you drive relatively consistently on the pavement you can average around 15-18 MPG. In the dirt that number will shoot downwards. For a daily driver use these numbers though (as crowdsourced by many owners over the years).

So what is the fuel consumption of Jeep Wrangler V6 by year?

17.7 miles per gallon if you want a safe bet of average fuel consumption for all model years. With newer models reaching 20 MPG. That is pretty remarkable. You can head out and rock climb all weekend and then return home to your comfortable climate-controlled garage in your Jeep Wrangle with a V6 and get 20 MPG. Check the graph below: 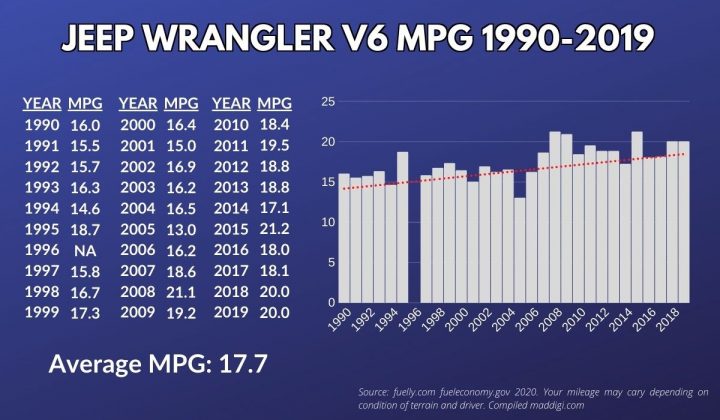 The Jeep Wrangler inline 4 engine is a gas sipper. They usually have the best jeep mpg because it won’t be wasted on power. Unfortunately, the ride is not a thrill and you may find yourself being helped out by the big boys. But don’t kid yourself.

The 4 cylinders are a great starter truck and they can be great daily drivers to get you from point A to point B. If this is you then you can see what kind of fuel burn you can expect with these cute little guys.

So what is the expected fuel consumption of Jeep Wrangler 4 cylinder from 1987-2019?

18.5 miles per gallon if you want a safe bet of average fuel consumption for all model years. The 4-cylinder Jeep Wrangler in 2019 got 23 MPG. That is not a whole lot more than the V6. The 4-cylinder with a turbocharger gives you 270 horsepower and 290 ft-lb of torque. The same Jeep Wrangler with a V6 gives you 285 horsepower with 265 ft-lb of torque. The inline 4 looks like the best of both worlds.

For recent model years check the graph below: 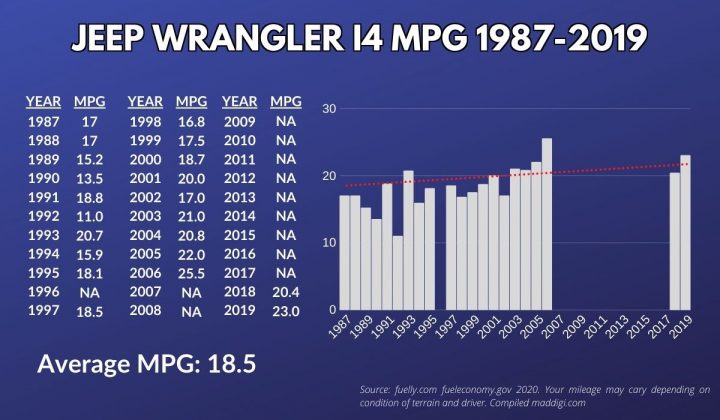 The difference between a V6 and a 4 cylinder is not as big as one would think. The power difference is much greater than the potential MPGs you will save. And the newer the car the better the gas mileage is in general for that engine type no matter which engine. You’re probably looking at the best jeep mpg right here.

The MSRP and used truck pricing are not a huge difference either. There may be a larger inventory of used 4 cylinders than 6 cylinders but the cost savings would be minimal for what you would be giving up in power. 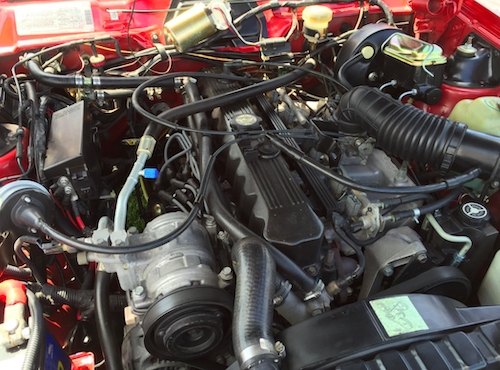 If you’re looking for a daily driver that only touches pavement then you may opt for the cheapest model you can get your hands on.

READ MORE: WHAT ARE SOME CARS THAT LOOK LIKE JEEPS?

But if you want something with better performance and better abilities then a V6 powered Jeep may be up your alley. If you are not worried bout the turbo lag and the bevy of additional parts that could break the 4 cylinder turbo will give you the best of all worlds. The Jeep Wrangler gas mileage will vary quite a bit. More power? Less gas. That’s typically how life works.

Do you have a Jeep that performs much differently than the graphs above? Do you know whether are Jeep Wranglers good on gas or not? Do you have a secret to getting optimum mileage?

Some off-roading purists will be turned off by the turbocharger, but it seems that it can really give you the advantage of off roading as well as if the Wrangler is your daily driver.

The Jeep Wrangler is a great option for fuel economy. According to the EPA, it gets 17 MPG in the city and 22 highway (city and highway mileage numbers depend on whether or not you have an automatic transmission). If these numbers don’t sound all that impressive, consider this:

The Wrangler also has one of the highest top speeds available among SUVs today. With a V6 engine under its hood, it can go from 0-60 mph in 6 seconds flat! So if your priority is saving money at the pump but still want to feel like you’re driving something fast when you get behind the wheel, then we recommend checking out what’s new with this model.